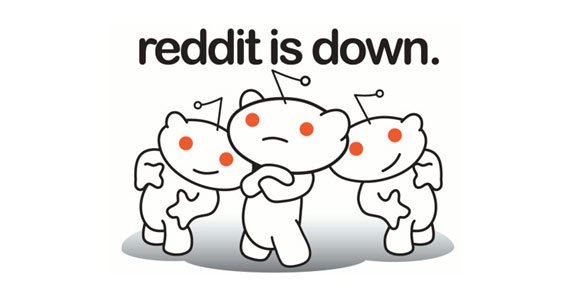 Reddit calls itself “The Front Page of the Internet”, and there’s never been a more appropriate slogan.  It’s s a fascinating mix of interesting news, cool links, social commentary and computer nerdiness all rolled into one.  Sounds like the ideal place to promote a website, right?

Well, it can be, but like all online communities, there’s a certain degree of “reddiquette” to follow.  Do it right, and you’ll be seeing a measurable stream of targeted traffic. Do it wrong, and you’ll be downvoted into nothingness.  Here’s how it works.

At its core, Reddit is made up of a bunch of “sub-reddits” on just about every category and topic you can imagine.  To find them, you can do a search on Reddit itself, or go to www.reddit.com/r/yourtopichere. Like reddit.com/r/music or reddit.com/r/politics.  Posting to the correct one is vital to making sure your submission doesn’t get downvoted and lost in the sea of other “me-too” posters.

Reddit shows its light-hearted side even when it crashes

When you first get started with Reddit, you can register an account without having to verify your email. It’s a good idea to go ahead and verify it though since as you comment and post links, you’ll build up karma.  Karma reflects your standing in the community based on comments you’ve made or links you’ve submitted – although it won’t help ratchet your posts up any higher than someone who just joined. It is, however, a good indicator of your status among your fellow “redditors” – and people do look at it.

Another important point about joining – choose your username wisely, as you cannot change it once it’s registered.  Every post you start, every link you submit, and every comment you make is stored under your profile page, like an archival trail of where you’ve been and what you’ve said.

It’s also worth noting that if you’ve already built up link and/or comment karma, these can’t be transferred to another account you create.

Redditors love things that are unique, funny, interesting, cute and courageous.  Unlike other social sites, Reddit isn’t about who your friends are – so being BFFs with the highest-ranking Digg member means nothing here.

Reddit’s popularity can be directly traced to this free and open sharing site. Just about anything and everything goes. According to statistics from Ignite, most Reddit users are male, between the ages of 35-44 (with 25-34 year-olds not far behind), and with income levels generally around $25,000-$50,000 per year. Most Redditors have a bachelor’s degree or at least some college education, and the overwhelming majority of their users come from the U.S. (in particular San Francisco and Seattle) with Canada (Toronto) a close second.

Reddit’s traffic has grown steadily since 2006.

Reddit users can easily spend hours on the site, and they’re always looking for something to click on.  That being said though, because of the potential for sites that trick users into clicking shortlinks (and then installing malware and other junk), URL shorteners generally go nowhere with Reddit users.  If you’re going to post a link, go ahead and post the whole, exact thing. This isn’t Twitter, so you aren’t restricted by the number of characters.

Overall, the best way to get the most out of reddit is to interact with it.  Post incredible photos, videos, ask for help or suggestions (and be prepared for answers you might not have expected!) . Upvote relevant comments (by pressing the orange arrow beside each comment or post), and leave your own comments.

Upvoting is what helps your content get to the top of the heap. It’s the same as other social networking features (Digg, StumbleUpon, etc.) in that the more you have, the higher your post will go and possibly make it to the front page.

There are some cases where the subreddit you’re interested in is a bit TOO targeted.  Like /r/copywriting . There’s not much action going on in there (probably because it looks too much like work!) but /r/starcraft, /r/gaming and /r/politics are positively overflowing with submissions and thus – traffic.

With this in mind, and if your topic is relevant, you may be able to squeeze it into one of the broader (traffic-getting) subreddit categories. For example:

If you’re feeling overwhelmed by the sheer amount of information on “The Front Page of the Internet” (and who wouldn’t?), you can easily customize the front page to reflect your interests while getting some interesting tidbits of news you may not find yet on other sites.

When you’re on a subreddit, just press the “frontpage” button on the top right to make it part of your Front Page. It will also appear along the top “most frequently used” categories that stretch across the site.  You can also see how many other users have this same subreddit as part of their front page.  It’s a great way to filter out the noise and get updates on exactly what you want to see – from all over the web.

This way, you can also see what kinds of post topics are popular with readers. In some cases, particularly if your content is extremely popular, it may also be cross-posted from one subreddit to another. So, for instance, if your post is gaining lots of upvotes over in /r/YouShouldKnow, don’t be surprised if it gets mentioned over in /r/TodayILearned.

The most important point to keep in mind when posting to Reddit is to tweak your post titles to take full advantage of the curiosity angle. Instead of posting a title like “Dealing with a Disrespectful Boss: 5 Ways to Make Sure You Don’t Get Fired”, a more provoking personal-style title will get more hits, votes and traffic – such as – “Got Fired! How Would You Deal with the Boss from Hell?”

Even though Reddit is a massive sharing community, it’s not exactly endearing to your average marketer. That’s because time and time again, people register accounts and post up articles or sales pitches expecting to siphon some of Reddit’s traffic.  Instead, they get torn to shreds in the comments, flagged as spam, submitted to abuse, and basically never heard from again.  There are, however, some blogs and subjects that do extremely well on Reddit, including:

If your blog or website doesn’t fit into one of these types, check to see if there is a /r/subreddit already made for it. If not, you can always create one yourself and invite others to participate. Overall, you want to be sure that your best content shines on Reddit. This isn’t a place where you can manipulate the system or post half-baked content. It will never see the light of day.

If your website content tends to be more progressive, unique, curious or simply eye-candy, there’s a strong chance it will do well on Reddit. All social media sharing sites have their own underlying pulse – and if you can tap into that by posting relevant content, you’ll be rewarded with a massive boost in traffic. Remember that here, people are actively looking for something that piques their interest. Tailor your posts to meet that urge head-on, and you’ll start reaping heaps of traffic.

If you’d rather jump to the front of the line when it comes to marketing, you can guarantee your post a spot on the front page through Reddit advertising.  You can target your ad to show on ALL of Reddit (untargeted), or only certain subreddits you choose (targeted).  The self-serve advertising FAQ will answer all your questions about how to set up an ad campaign and promote with Reddit.  Gabriel Weinberg of search engine startup DuckDuckGo, experienced phenomenal success advertising with Reddit, as he was able to reach the kind of brand-engaged audience he wanted (plus get valuable feedback to make his product even better).

Reddit is an eclectic blend of quirkiness and geekdom that, for the right kinds of websites, could make all the difference in getting your brand in front of engaged eyeballs and visitors who have something to say. Many business owners unfortunately dismiss Reddit as being the red-headed stepchild of the social media world, but if you’re targeting certain niches, aren’t afraid of criticism and want to reach trendsetters – there’s no better place.